Science proves that you love your dog like a baby

Interesting article about pets and how humans react/respond to them. From the abstract:

Neural substrates underlying the human-pet relationship are largely unknown. We examined fMRI brain activation patterns as mothers viewed images of their own child and dog and an unfamiliar child and dog. There was a common network of brain regions involved in emotion, reward, affiliation, visual processing and social cognition when mothers viewed images of both their child and dog. Viewing images of their child resulted in brain activity in the midbrain (ventral tegmental area/substantia nigra involved in reward/affiliation), while a more posterior cortical brain activation pattern involving fusiform gyrus (visual processing of faces and social cognition) characterized a
Stoeckel LE, Palley LS, Gollub RL, Niemi SM, Evins AE (2014) Patterns of Brain Activation when Mothers View Their Own Child and Dog: An fMRI Study. PLoS ONE 9(10): e107205. doi:10.1371/journal.pone.0107205 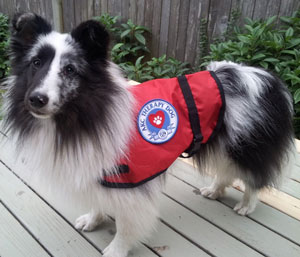 mother's response to her dog. Mothers also rated images of their child and dog as eliciting similar levels of excitement (arousal) and pleasantness (valence), although the difference in the own vs. unfamiliar child comparison was larger than the own vs. unfamiliar dog comparison for arousal. Valence ratings of their dog were also positively correlated with ratings of the attachment to their dog. Although there are similarities in the perceived emotional experience and brain function associated with the mother-child and mother-dog bond, there are also key differences that may reflect variance in the evolutionary course and function of these relationships.
http://www.plosone.org/article/info%253Adoi%252F10.1371%252Fjournal.pone.0107205
Labels: dogs people pets