In the U.S., someone suffers a heart attack every 34 seconds - their heart is starved of oxygen and suffers irreparable damage. Engineering new heart tissue in the laboratory that could eventually be implanted into patients could help, and scientists are reporting a promising approach tested with rat cells. They published their results on growing cardiac muscle using a scaffold containing carbon nanofibers in the ACS journal Biomacromolecules.
Gordana Vunjak-Novakovic, Rui L. Reis, Ana Martins and colleagues point out that when damaged, adult heart tissue can't heal itself very well. The only way to fix an injured heart is with a transplant. But within the past decade, interest in regenerating just the lost tissue has surged. The trick is to find materials that, among other things, are nontoxic, won't get attacked by the body's immune system and allow for muscle cells to pass the electrical signals necessary for the heart to beat. Previous research has found that chitosan, which is obtained from shrimp and other crustacean shells, nearly fits the bill. In lab tests, scientists have used it as a scaffold for growing heart cells. But it doesn't transmit electrical signals well. Vunjak-Novakovic's team decided to build on the chitosan development and coax it to function more like a real heart. 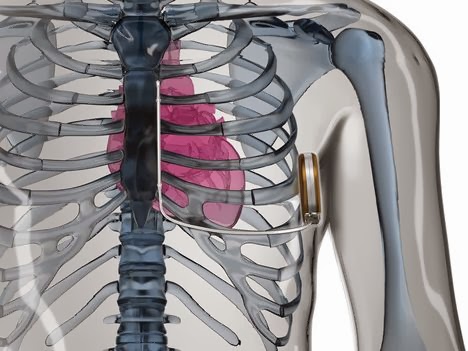 To the chitosan, they added carbon nanofibers, which can conduct electricity, and grew neonatal rat heart cells on the resulting scaffold. After two weeks, cells had filled all the pores and showed far better metabolic and electrical activity than with a chitosan scaffold alone. The cells on the chitosan/carbon scaffold also expressed cardiac genes at higher levels.
Labels: Cardiology Cardiovascular Cholesterol Gene Therapy. Heart Disease