Racial stereotypes and expectations can impact the way we communicate and understand others, according to UBC research.
The new study, published in the Journal of the Acoustical Society of America, highlights how non-verbal "social cues" - such as photographs of Chinese Canadians - can affect how we comprehend speech.
"This research brings to light our internal biases, and the role of experience and stereotypes, in how we listen to and hear each other," says Molly Babel, the paper's lead author and an assistant professor with UBC's Department of Linguistics.
One of the study's tasks involved participants from the UBC community transcribing pre-recorded sentences amid background static. The sentences were recorded by 12 native speakers of Canadian English. Half of the speakers self-identified as White, and the other half self-identified as Chinese. All speakers were born and raised in Richmond, B.C., which is south of Vancouver. 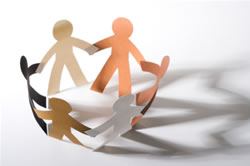 The pre-recorded sentences were accompanied by either black and white photos of the speakers, or by an image of three crosses. Overall, listeners found the Chinese Canadians more difficult to understand than the White Canadians - but only when they were made aware that the speaker was Chinese Canadian due to the photo prompt.
Participants were also asked to rate the strength of the accents of the speakers. They were asked to listen to two sentences from each speaker - one accompanied by the speaker's photo, the other by an image of crosses. "Once participants were aware that they were listening to a White Canadian, suddenly the candidate was perceived as having less of a foreign accent and sounding more like a native speaker of Canadian English," says Babel.
"It tells us as listeners that we need to be sensitive about the stereotypes that we carry," notes Jamie Russell, the study's co-author who was an undergraduate honours student in UBC's Department of Linguistics during the project.
Background
The study, "Expectations and Speech Intelligibility," is published in the Journal of the Acoustical Society of America. The authors are Molly Babel and Jamie Russell, both of UBC's Department of Linguistics.
The study involved five tasks: speech perception in noise, accentedness rating, an implicit measure of ethnic bias, an explicit measure of ethnic bias and a social network self-assessment.
Labels: choices communication conflict resolution racial stereotypes